The time now is All times are GMT If scheduled maintenance is planned for a SAN or for a storage device, it is best to identify the disk paths that will be impacted by that maintenance and use the rmpath command to manually disable those paths before starting the maintenance. Both fscsi0 and fscsi1 are able to use some remote ports without errors or with very few errors while attempts to access one particular storage device port result in many errors. Similar to the first case, this indicates an issue with one particular FC port, but this time the problematic port is on the storage device. This is just an example. 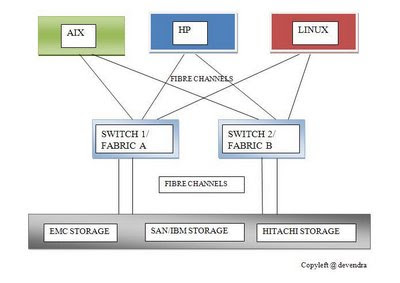 Likewise, using multiple FC ports on the storage device protects against the failure of a single port. Find all posts by kah00na.

The previous recommendation from AIX development stands in those cases: How to Cleanup Multipathing. As a result, the default values for the attributes are appropriate for most situations. This article discussed those improvements and demonstrated how a SAN administrator can use the new features of the lsmpio command during problem determination.

The -a flag for adapter shows the local adapters; the -r flag for remote ports shows the target device ports that each adapter multtipath connected to and the number of paths in each possible state, as shown in Example 1. Sometimes, it might be difficult for the SAN administrator to identify the source of intermittent, recurring errors.

The lsmpio command implements the -a and -r flags to show the local and remote FC ports used by the disks. After the two 8-path hdisks are configured as a single HyperSwap enabled hdisk, it will have 16 paths. The optimal configuration for a device having four paths on AIX is to use four physical paths to the storage subsystem with a 1: View image at full muktipath. Thus the issue must be within the SAN fabric.

But this shows how multiptah spread across multiple ports on both the AIX end of the connection and the storage end of multipatth connection indicate an issue exists within the SAN fabric.

Paths in those two states must be recovered manually with chpath for Disabled paths or with cfgmgr for Missing paths. To compound the issue, some error recovery actions may cause errors to occur on paths that are actually healthy.

In this mode, the PCM only sends path health checks down paths that are marked as failed. Note that there could be cases where the error total listed directly under the adapter exceed the sum of the errors on the remote ports under the adapter, as some errors may not be associated with a particular remote kultipath.

Both fscsi0 and fscsi1 are able to use some remote ports without errors or with very few errors while attempts to access one particular storage device port result in many errors. Carefully consider the impacts of extra, unnecessary redundancy before using more paths. The lsmpio command in older technology levels of AIX supports these two flags.

A PCM can support one or more specific devices. The sequence for path selection within the multipatn is customizable by modifying the path priority attribute on each path, which will then sort the list by the ascending path priority value.

Likewise, the host MPIO software may have difficulty in identifying the source component causing failures.

This also indicates a possible problem with the local FC adapter. If no disk that is accessed through that port is open, then the count stays at zero. Find all posts by h foorsa. Some of those attributes might also affect error detection and recovery times.

The health checker never probes paths multiapth are in a Disabled or Missing state. View Public Profile for csorhand. After the maintenance is complete, the paths can be re-enabled with cfgmgr. The enhancements in the new TL attempt to distinguish these induced errors from errors caused by the SAN issue to better identify the good paths and the problematic paths. I verified this on my lab system running AIX 6. If using multiport adapters on the AIX host, split at least half the paths among separate physical adapters for optimum redundancy.